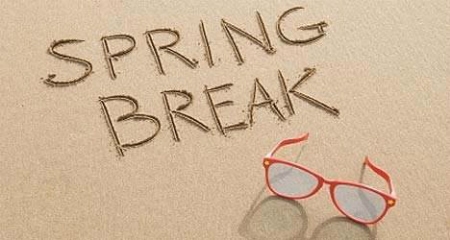 We are just a few weeks away from a time that hundreds of thousands of college students across the nation look forward to…Spring Break!

After daunting hours of studying, cramming, pouring caffeine and energy drinks down their throats like water, it’s finally time to relax and unwind! Many of these students will flock to the beach ready to bask in the sun and party the week away. Regardless of their vacation destination, one thing is certain; many will make decisions that will be reckless and potentially fatal.

For some strange reason spring break has been dubbed a cultural rite of passage in the U.S. But what is that passage leading to? Is it the passage to hangovers with dry heaves and pounding headaches? Perhaps it’s the passage to wild promiscuous sex? And if none of these resonate, perhaps it is the passage into a life of addiction or worse yet a closed coffin.

According to the U.S. National Institute on Alcohol Abuse and Alcoholism (NIAAA) approximately 1,825 college students between the ages of 18 and 24 die each academic year from accidental alcohol related injuries.

According to the Centers for Disease Control and Prevention, binge drinking is defined as a female consuming four or more drinks on a single occasion and a male consuming five or more drinks in one sitting. Another study by the American College of Health reported the average male drinking 18 alcoholic drinks per day and the average female consumed up to 10 per day all during spring break. Now that is a lot of alcohol consumption in a short amount of time.

It’s not just the amount of alcohol that is being consumed that is worrisome. Many of these young people are at risk of damaging their brain when they drink so much alcohol.

“High consumption of alcohol can affect breathing, heart rate and the body’s ability to regulate temperature, leading to a shutdown of the body’s life-support functions.”

Studies of MRI scans of the brains of young people who drank heavily showed damaged nerve tissue compared to those who did not drink. The brain is still developing well into the twenties and can be harmed by excessive drinking. Studies have shown that alcohol can cause long-term damage to the brain and as well as impair one’s memory, coordination, and movement. Bottom line – the human body just isn’t made to absorb all of that poison during one short time without serious consequences. High consumption of alcohol can affect breathing, heart rate and the body’s ability to regulate temperature, leading to a shutdown of the body’s life-support functions.

So as college students pack their bags and head to those luxurious vacation destinations, they should do so with a level head and not drink themselves into oblivion. No doubt about it, spring break should be a time to melt away the stress of the semester.

Unfortunately, for many, it turns into a time of alcohol-related incidents including alcohol poisoning, accidents (vehicle, boat, jet ski, etc.), assaults, rapes, and unprotected sex. And all of these situations can have life-altering consequences. Spring break should be the passage from adolescence into responsible young adulthood. Hopefully, this year’s spring breakers will not throw caution to the wind and, instead, exercise good judgment while enjoying their vacations.