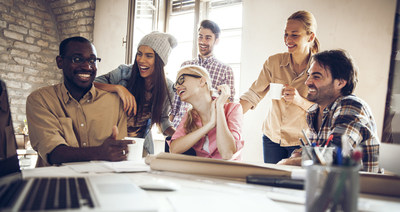 Generally speaking these days, accolades make many people just want, and sometimes need more accolades. Though responsible for great success and progress, ambition can also cause feelings of worthlessness, mania and anxiety. Neuroscience now explains why, and offers insight on alleviating its adverse effects.

Motivation is a neural process that influences avoidance and desire. When dopamine is released to certain areas of the brain, it triggers feedback predicting whether something good or bad is about to happen. The prediction then prompts our motivation to either minimize the predicted threat or maximize the predicted reward.

This system applies to all kinds of stimuli and scenarios, from finding food, shelter and other survival means to pleasure-seeking behaviors such as drugs and romance. It also applies to ambition, whereby a relentless dopamine feedback loop predicts higher and higher rewards and motivates us with increasing stakes.

A 2012 study published in the Journal of Neuroscience found that “go-getters” who are willing to work hard for rewards had a higher release of dopamine in certain areas of the brain known for their role in reward and motivation than other participants.

Of course, ambition isn’t automatically bad. According to one study published in the Journal of Applied Psychology, ambition is correlated with educational attainment, occupation prestige and income. Children with above average educational aspirations generally obtain higher status and better paying jobs. Ambition is even positively, albeit weakly, linked to life satisfaction.

On the other hand, rates of mania are higher in countries whose cultures emphasize individualistic, as opposed to collective, striving. Ambition increases one's risk of bipolar disorder, narcissistic personality disorder and depression. Ambitious people die earlier.

“At its worst, ambition mirrors the sick cycle of addiction.” The American Society of Addiction Medicine defines addiction as:

An inability to consistently abstain, impairment in behavioral control, craving, diminished recognition of significant problems with one’s behaviors and interpersonal relationships, and a dysfunctional emotional response. Addiction alters “motivation hierarchies” and “supplants healthy self-care”. It need not include alcohol or drugs.
As we build our careers and seek validation for our work, millennials are especially vulnerable to ambition addiction. Research suggests that millennials are, in fact, more professionally and academically ambitious than previous generations. According to a Pew Research Center survey from 2010, 57% of millennials say it’s not likely they’ll remain with their current employers for the rest of their career, compared to 36% of Gen Xers. U.S. college attendance by 18- to 24-year-olds recently hit an all-time high, and a full third of college graduates plan to also attend graduate or professional school. Unsurprisingly, 20 to 39 year olds are the fastest growing population segment for stimulant prescriptions.

Today’s 20-somethings enter the workforce in an era of intense competition, where public health experts call stress an epidemic. And stress starts earlier in life, with some data suggesting that today’s average high schooler is as anxious as the average 1950s psychiatric patient.

It’s a bad combination: two of the greatest risk factors for addiction are stress and youth. With the wrong steps, we jeopardize our well being to what David Hume called the “incurable passion” of ambition.

Here are some psychology-backed solutions to keep our heads on straight without sacrificing success:

1. Set the right kind of goals

Perfectionism is setting unyielding, unrealistic expectations. While healthy high standards can motivate us to accomplish great things, perfectionism feeds addiction and makes us unhappy. FORBES contributor and psychologist Todd Essig observes, “Somehow we have lost an appreciation for the fact that a biological ‘good enough’ really is good enough.”

Research shows that people who value extrinsic goals and then don’t achieve them are at high risk for anxiety and depression. We can see this neurologically: if our expectations aren’t met, dopamine activity and the pleasure associated with it drops off. Furthermore, despite our biochemical conviction that the more we achieve the happier we’ll be, addiction produces tolerance mechanisms within the brain that, ironically, cause a stimulus’ feel-good effect to diminish with repeated use.

Set achievable goals and embrace surprise if you surpass them. According to Stanford science writer Bruce Goldman, research exposes that “what really gets the reward circuitry jazzed up isn’t so much the good vibes as it is the extent to which the goodness of the vibes exceed expectations.”

Besides stress and youth, another risk factor for addiction is poor social networks. Conversely, research confirms the cliche that the happiest people are those with the strongest social connections. One 75-year Harvard study revealed that the most important component to a satisfied life is love and belonging. If you feel an empty craving, more accomplishments are not what you need.

Find people who care about you and can help you manage your stress. Nurture those relationships. In his article “3 Warning Signs You’re Too Busy to Succeed”, Dale Partridge recommends regularly asking, “Are you too busy to catch up with people? Are you investing into friends and family? Or are you just checking in when it’s convenient for you?”

“With self-awareness and loved ones to hold us accountable, we can balance ambition for a more fulfilling yet equally rewarding life.”