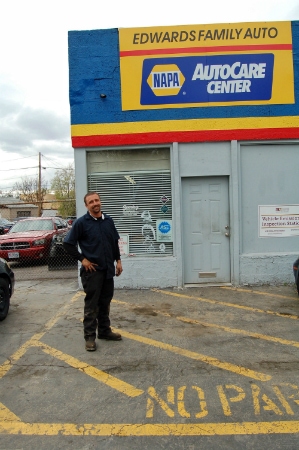 Mike Smith, now 35, grew up around alcoholism and addiction, it was prevalent on his dad’s side of the family life, which he did not grow up around, so when he was around them he began using at twelve years old to fit in. Mike dreamt of becoming a marine biologist when he was a kid, and that dream was soon lost and replaced with using.

Mike found himself in the long arm of the law with burglary charges, and was able to put a little sober time together, but nothing that held up. From that bit of sobriety he experienced he knew it was a better life, and after relapsing again, and picking up yet another burglary charge, he knew it was time to really get sober.

Mike ended up signing up for the Alcohol & Drug Clinic at the University of Utah, the other people in the group were from The Haven. He went down to a meeting at The Haven, and talked to Heather Chase about getting into sober living. He entered The Haven sober living program January 13th, 2010. Mike spent a full year in the Sober Living program, which ended up being the key to his now 7 years of sobriety.

The Haven provided Mike with a stable living environment, away from his past, that allowed him to successfully transition into a life of recovery. The Haven requires that all people in the sober living program attend a minimum of 4 outside support meetings a week, such as AA, CA, HA, etc. This helped Mike integrate even more into the recovery community and find solid support among other people succeeding in recovery.

Mike quickly became involved around The Haven, and began giving back to newcomers as was done for him. He believes, even to this day, that giving back in the program was the what helped him grow the most in his sobriety. He felt so supported being surrounded by healthy people he could look up to when he was new, he knew he had to take on that role for others to stay solid in his recovery program.

“Everyone needs these supportive new friendships when they are new to recovery, it helps people break away from old habits, and unhealthy past relationships with friends and even family.”

Today, seven years sober Mike is living a”good life”, he is a very busy and successful mechanic, he still participates in many of The Haven’s sober activities, is always giving resident’s rides to and from meetings, and goes on as many of the sober trips as he can. Staying connected and involved helps him stay in a place of gratitude for how far he has come!

“I would tell anyone wanting to change their life and get sober to go to The Haven, it is the best decision anyone can make,and was the best decision I ever made. The Haven will help you get to understand those core issues buried deep down, that every addict/ alcoholic has, and they will set you up to succeed. I am so grateful for what The Haven sober living did for me, and for what the community still does for me in my recovery seven years later.”