Drug Use and Legalization 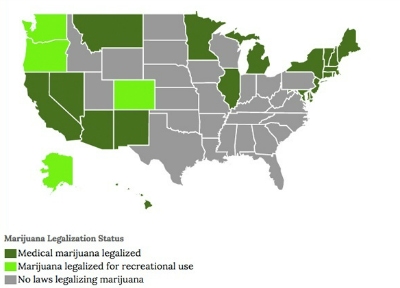 To addiction treatment providers, it matters little whether or not marijuana is legal or illegal. The drugs that people use and abuse are based largely on social norms, not legal status. When it is socially acceptable to use a substance, more people will choose that substance to use over others. Tobacco is legal, but its use has declined as smoking cigarettes has become more socially unacceptable. However, marijuana, especially due to its medicinal use, has increased as it is becoming more and more socially acceptable. Let’s talk about what that looks like in the addiction world. Think about prohibition; people didn’t stop using alcohol because it was made illegal. Although use trends fluctuated, people continued to use alcohol, despite its illegal status, because it was socially acceptable to do so.

So with marijuana becoming increasingly legal in more and more states, making the concerns with it similar to alcohol here are some of the things to pay attention to:

2. The problems associated with early substance abuse can be irreversible. What happens to an individual who abuses marijuana early in life is a game of Russian roulette.

3. It’s important to tell young people the truth. A lot of parents are not comfortable talking about substance abuse with their children or have had horrible experiences with substance abuse, like addicted parents, and use half-truths or scare tactics with their kids. The better course is to tell kids the truth.

If you treat young people with respect and give them good information, the greater the likelihood is that they will make healthy choices. A little marijuana now and again might be fun for an adult, but until a person’s brain has reached maturity, the dangers and impacts of marijuana use are too great for it to be a healthy choice for young people.