Dopamine: Is It Addictive? 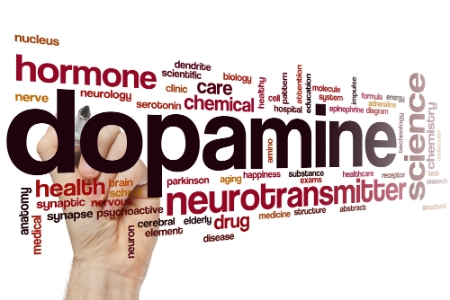 Dopamine is not a “reward” chemical. That’s not actually the way our body uses it. First, like all things in our body, dopamine serves many purposes. It serves as a vasodilator, expanding our blood vessels. Loss of dopamine results in Parkinson's like conditions, a degenerative neuromuscular disorder.

Most antipsychotic drugs work by inhibiting the function of dopamine, not because its “reward” makes people hallucinate, but because the brains of people with schizophrenia may be overly sensitive to the effects of dopamine. ADHD (Attention-deficit and hyperactivity disorder) may involve, in part, decreased dopamine activity, where parts of the brain aren’t working well enough to constrain attention and resist impulses. Dopamine serves many complex functions in the brain, and only kindergarten brain science describes it as an addictive drug.

When a person is ABOUT to experience pleasure, dopamine is released in the brain, and in the parts of the brain that experience and process pleasure. Dopamine’s role here is not that it makes you feel good, it doesn’t, the pleasure and hedonic or euphoria feeling comes from opioids in the brain, neurochemicals which increase pleasure and deaden pain. Dopamine’s role in pleasure and reward is that it helps your brain to recognize “incentive salience.” This means that it’s like a little red flag to your brain, saying “pay attention, this is about to feel good, and you want to remember this, so you can do it again.”

A critical issue here is that a lack of dopamine doesn’t actually make the experience feel less good. In studies with rats, where dopamine was suppressed, rats showed “normal hedonic reaction patterns,” and still showed normal pleasure responses even though dopamine was suppressed. In another rat study, this one using heroin, it was shown that dopamine transmission increased in the anticipation of the heroin administration, but decreased sharply once the drug was administered (by the rat itself). Notably, this effect wasn’t present the first time the rat self-administered the heroin, because they hadn’t learned yet that the heroin was about to feel really good.

People’s problems are never simple. And when a person does a thing over and over, even when the behavior is causing problems, there are a great many complex reasons behind that behavior. When we offer the reductively simple answer of “because dopamine,” it distracts us from the person. It is the person who learns, and dopamine is merely a factor, one factor among many, in the learning. Instead, if we focus on the learning, and the salience aspects of these process, it helps us to draw people’s attention back to their own behaviors, their own motivations, and the meaning that they, and possibly their social or religious background, have given to this behavior or experience. It helps us to put people back in the driver’s seat of their life.