Amphetamines: Are They Tutoring Your Teen? 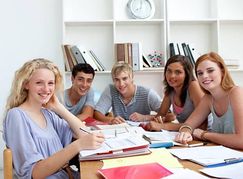 The pressure to perform in all areas starts to become most prevalent in teenage years; school, sports, social life, and other issues become stressful, and the desire to be better than the rest reaches new heights. As we have seen drug use spread rapidly through the teenage scene in schools, at parent’s houses after school, and on the streets, performance-enhancing drugs should not be overlooked. Is your child up late into the night cramming in study hours and papers, before you pat yourself on the back for instilling such determination into your teen, take a closer look to assure amphetamines are not involved.

There has been a rapid increase in the number of high school students fueling themselves with amphetamines to enhance study ability; the most common used is Adderall. Due to the increasing number of teens abusing these drugs, more and more high school students are ending up in treatment centers instead of the colleges they were working so hard to get into. Most individuals of older generations can remember college and some of the all-nighters they pulled with friends and too much coffee, but things have become much worse today, and it needs to be talked about.

According to students being interviewed on this topic, these amphetamine pills are alarmingly easy for them to get. And with the societal pressures of success, and to be the best, it has become very clear how dangerous this problem and its consequences have become.

As teens were interviewed further on this topic it quickly became clear that most parents are completely in the dark about their kid’s pill use. Many parents are blinded to the pressure their teens are really under, due to the pressure they themselves are under, and the desire they have for their kids to be successful. They are also busy, and therefore unintentionally looking over this issue as one that is affecting their child. As we have come to understand, a majority of parents are just doing the best they can with that they have; and if they come from a childhood of academic pressure, they are more likely to hold their child to that expectation as well.

There are some things parents can do to help relieve any unrealistic pressure put on their teen:

1. Focus on excellence vs. ranking- help your teen focus on doing their best, instead of focusing on being the best out of everyone. Your child already suffers from societal comparison, so try and direct them to a healthier mindset.

3. Affirm your student’s self-worth- for many teens their current ranking, and academic performance is defining their self-esteem, help your teen understand that fusing their identity with their school performance can be more harmful than good.

4. Help students learn to perform under pressure in a healthy manner- for many students testing is not the most positive and constructive form of gauging academic intelligence and motivation. So helping them understand that and believe in themselves will go far.

As a parent, and/or guardian communication is key. Communicating about the negative stuff is just as important as the positive, the more you talk about with your teen the less likely they are to hide things from you out of fear and judgment.

Learn about local resources available to help you and your teen have a healthy, open, and honest relationship. Always keep in mind that the more you know about your teen’s life, the better.