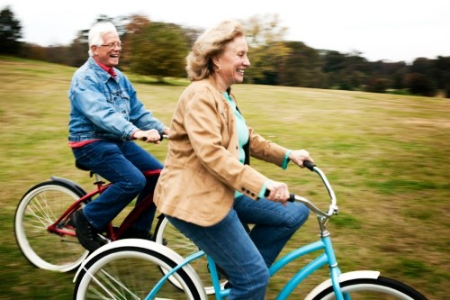 Most people, no matter their age, don’t picture a senior (those 50 plus) when it comes to imagining an illicit drug user. Illicit drugs include marijuana, cocaine, heroin, hallucinogens, inhalants, and prescription drugs (pain relievers, stimulants, tranquilizers, and sedatives) used not as medically prescribed. Seniors are using these drugs more frequently and perhaps with dangerous consequences.

By itself, alcohol can be a significant problem for seniors as their metabolism slows; bodies simply become less capable of processing alcohol. Older people tend to have more medical conditions treated with multiple prescriptions, which when combined with alcohol can complicate existing conditions. This may result in additional prescription drugs, perpetuating a vicious cycle.

Financial insecurity is a major source of stress. Even with good financial planning, there are no guarantees that one will have enough resources. For many men who saw their primary role to be "the provider," it can be a crushing blow to recognize that they cannot afford to retire. Hard work does not guarantee rest and relaxation.

In 2014, wages for women of all ethnicities were 78 percent of the wages of white men. For Hispanic or Latino women, that number is 54 percent while it is 64 percent for African-American women. Native American women or Native Alaskan women earn 59 percent and Pacific Islander or Native Hawaiian 62 percent of white men. Lower wages produce lower contributions to Social Security, pension plans, and other retirement options, which means a much smaller retirement income.

Caring labor is sharply increasing. With increased life expectancy, more seniors are caring for their elderly parents. Like childcare, the burden of this care falls disproportionately on women. Women will take more time off from work to care for elders, work at lower-paying jobs for flexibility, and offer financial support to elderly family members. Many more elders are caring for or providing support in various forms to their grandchildren and their adult children as well, which means more stress for women as primary caregivers. Should one’s spouse become ill in the process, one person may find herself responsible for care on multiple fronts while not suitably caring for herself.

"Loss is another very common reason for use. As people begin to lose their spouses, family members, and friends, we lose more than our social lives; we lose parts of ourselves."

For all of these reasons and more, seniors begin or continue to use alcohol and drugs. That extra glass of wine each night or the extra half pill of an anti-anxiety medication or a sleep aid is seen as just a little something extra to get through the day or something deserved. But the effects of these little extras can quickly add up, especially for women whose use, for a variety of reasons, escalates more quickly toward addiction. This growing problem of senior substance abuse requires a concerted and integrated approach.

Family members and friends need to be more alert to the possibility that loss of balance, falls, memory issues, or slurred speech may not be merely signs of aging but effects of alcohol and drugs. Raising this concern may be very awkward and uncomfortable for everyone, but it needs to happen.

“Pharmacists need to educate consumers about the side effects of prescription drugs and the dangers of mixing with alcohol along with supplements.”

Physicians need to utilize effective screening tools with their patients and not too quickly ascribe signs and symptoms to aging. Additionally, physicians need to be very careful prescribing certain combinations of drugs such as opioid pain relievers, anti-anxiety medication (benzodiazepines) and sleep aids, all of which depress the central nervous system.