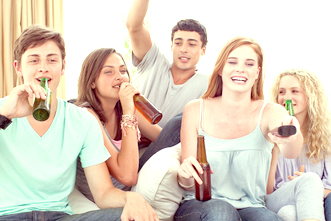 There lies a difference between alcohol abuse, and alcoholism, also referred to as alcohol dependence. Both are unhealthy, unsafe, and problematic ways of using alcohol; often time’s alcohol abuse leads people to the disease of alcoholism. Alcoholism is a brain disease in which a person is physically, mentally, and emotionally addicted to alcohol and/ or drugs. They will suffer withdrawal symptoms if they decide to stop suddenly, and often need treatment to recover. Alcoholism causes compulsive drinking, which is the inability to control the amount consumed, and the behaviors that are associated with this disease. Despite the desire to quit, most can't seem to do it on their own. The physical, mental, and emotional damage brought on by this grueling disease is endless.

Alcohol abuse, while not defined as a disease like alcoholism is, posts threats in behavior, health, and the social ability to “drink normally”. Alcohol abuse is based on the behaviors one elicits, and engages in while consuming alcohol. This person can generally control when they need or want to stop, unlike in alcoholism. However the dangerous behaviors they engage in such as binge drinking, drinking while driving, legal issues related to abusing alcohol, and letting drinking affect work and home life. These behaviors can and will eventually lead a person into alcoholism, or require them to seek substance abuse treatment in order to get their life back in control.

In people suffering from the disease of alcoholism have a physical or mental need for alcohol, much as their need for water, food, shelter, and sex. Lets look at the health implications for alcoholism, and then alcohol abuse, as they both affect the individual immensely.