A Look at Synthetic Cannabinoids 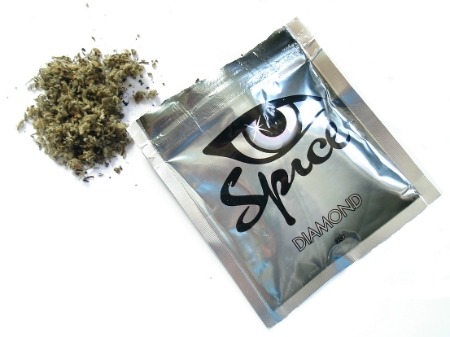 In December 2016, the New York Times ran the headline, “Drug 85 Times as Potent as Marijuana Caused a ‘Zombielike’ State in Brooklyn.” The article described a “mass casualty event” in which emergency medical service (EMS) workers were called to a Brooklyn intersection to aid “multiple people” shuffling about in a confused “zombielike” state.

While that story got picked up as a national news item, the incident in New York was neither unique nor novel. Parallel events had occurred in Los Angeles’ “Skid Row” in the spring and summer of that same year, where EMS workers found people dazed, confused, and in some cases unconscious in what was described as a “war zone.” And the cause of these “zombie outbreaks,” which were ultimately attributed to the ingestion of synthetic cannabinoids, better known on the street by their various brand names such as “Spice,” “K2,” or “Mojo”, has been a growing concern starting as far back as a decade ago.

Synthetic cannabinoids are drugs that were synthesized by pharmaceutical researchers starting back in the 1970s, so-named because they interact with the same receptors in the brain that are affected by the most well-known psychoactive ingredient in cannabis, delta-9-tetrahydrocannabinol (THC). Synthetic cannabinoids, therefore, mimic the effects of marijuana but are often many times more potent than THC in terms of their psychoactive effects. In recognition of this, J.W. Huffman, one of the original developers of synthetic cannabinoids, once remarked in an interview that “THC is a rather mediocre cannabinoid.”

"Although synthetic cannabinoids were mostly developed as pharmacologic probes to study the “endocannabinoid system” in the human brain as opposed to being developed as drugs for human consumption, they ended up being synthesized overseas, sprayed onto plant material, and sold as “legal highs” in Europe and the U.S. starting in around 2005."

Synthetic cannabinoids were initially sold legally in “head shops” or online with product labeling advertising them as “herbal potpourri” and “not intended for human consumption.” Nevertheless, they were almost universally manufactured, sold, and purchased with the intent of users smoking or ingesting them for recreational purposes. With increasing reports of people having cannabis-like experiences after smoking “Spice” products, as well as more toxic effects such as agitation, loss of consciousness, and rapid beating of the heart, the US Food and Drug Administration (FDA) banned the 5 most common synthetic cannabinoids in 2011, making them illegal to possess or sell within the US. As of 2016, a total of 28 different synthetic cannabinoids have been banned by the FDA.

Curbing the use of synthetic cannabinoids through legislative bans has not been particularly effective. Each time individual drugs have been banned, alternative versions have popped up to replace them, creating a “moving target” problem. Recent bans have attempted to make up ground by including entire classes of drugs based on a particular chemical structure, but the sheer number and diversity of synthetic cannabinoids — at last count, more than 400-500 different compounds have been characterized, have thwarted those efforts as well. Consequently, while many synthetic cannabinoids are now illegal, newer products continue to elude FDA bans.

A number of articles from the medical literature have recently summarized the wide range of toxic effects associated with synthetic cannabinoid use. A recent review noted that the most frequent symptoms of intoxication observed in users presenting for medical care were rapid heartbeat, agitation, drowsiness, nausea/vomiting, hallucinations, irritability, high blood pressure, psychosis, delusions, disorganization, seizures, and aggression. Psychosis, therefore, appears to be the most common psychiatric effect of synthetic cannabinoids, encompassing delusions, hallucinations, disorganization (trouble with thinking in an ordered and logical fashion), and paranoia.

Beyond psychosis and other psychiatric issues, some cases of coma, respiratory depression (difficulty breathing requiring intubation), and even death have been described in association with synthetic cannabinoid use. In the US, there have been about 20 reports of death in people who were intoxicated with synthetic cannabinoids. Worldwide, that number has been estimated to be closer to 100.7

The health risks of synthetic cannabinoid use are compounded by the fact that in the absence of reliable package labeling, users have no way of knowing what it is they’re smoking. As distinct drugs, each synthetic cannabinoid has different properties such that the effects when consumed by an individual are unpredictable. When JW Huffman was asked what he thought about people using synthetic cannabinoids for recreational purposes, he commented, “smoking a compound with unknown biological properties in humans is a stupid thing to do.”

In addition to the unknown ingredients of “Spice” products, part of their danger lies in the persisting misperception that they are safe alternatives to smoking marijuana. Data from the Monitoring the Future Study, an annual survey of US high school students, indicates that while synthetic cannabinoid use appears to be on the decline overall for minors, most still don’t think of using them "a few times" as being associated with significant risk.

In addition to potential legality and false perceptions of safety, young people often use “Spice” products because they can’t be detected in routine urine drug tests. Relative to many other drugs, “Spice” products are also very cheap, making them more accessible to children with limited resources (as well as to homeless adults who made up a large proportion of those treated during the “zombie outbreaks” of the past year).

Finally, looking at the packaging of “Spice” products, it’s hard not to conclude that they’re often deliberated marketed to young people, with brightly colored packaging, cartoon logos, and fruit flavors. As mentioned, synthetic cannabinoid use among high school students is less common than it was a few years ago, but as of 2015, more than 1 in 20 US high school seniors still reported that they’d used synthetic cannabinoids in the past year.8 Given the potential for psychosis and even death, that rate of use among children is sufficient cause for parents to worry and to start a conversation with their kids about zombies, "Spice," and synthetic cannabinoids.